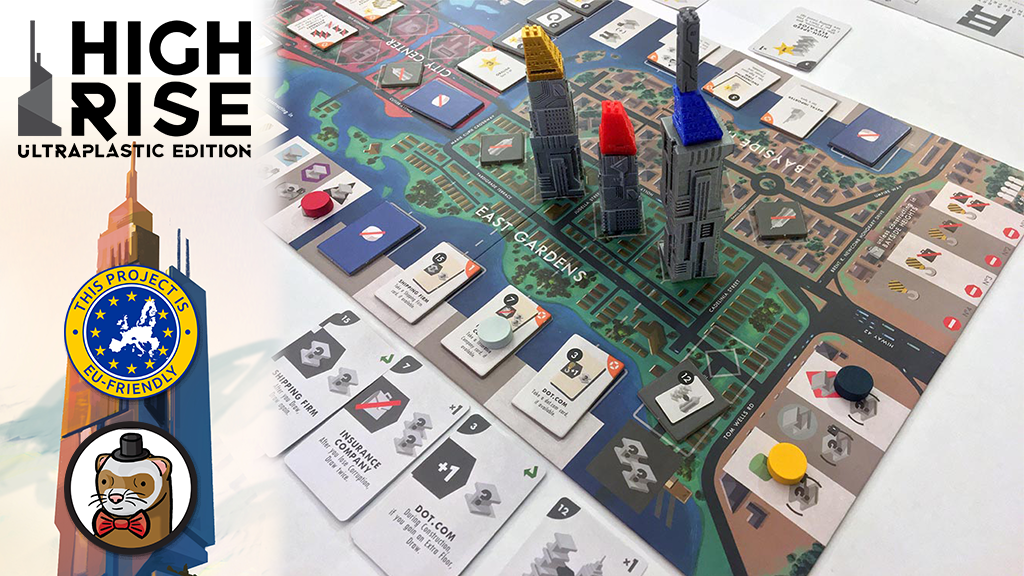 The tabletop board game about construction and corruption, now with gorgeous plastic buildings

Latest Updates from Our Project:

I want to thank all 1,476 of you for helping bring High Rise back into print, with amazing plastic buildings.

In the next couple of days, I will update you on what to expect, especially in terms of the BackerKit post-campaign pledge manager.

I may be slow to reply to messages and comments tomorrow, because I need to catch up on some much-needed rest. But I'm so thankful to you for helping me continue to bring games onto your table!

Hi! Just a quick update that we're on our final day, and we've already broken $100k! I'm so happy to have hit this milestone with you.

Of course, this means that we've unlocked the $100k stretch goal! Here it is again:

I've gotten a bunch of amazing ideas for the tokens; I really like the idea of replacing the plane with a sports car, so all of these modes of transport are somewhat realistic to a ridiculously wealthy person getting around a large city.

One more stretch goal? Why not!

At $110k, we will reprint the Fancy Bits expansion from the original Kickstarter campaign! That means I will have an unlimited amount to sell when the BackerKit campaign opens in two weeks.

By the time I write this update, we will likely be sold out of Fancy Bits from the original print run. I was originally not going to print more, but it looks like there's enough demand for us to do so!

They were sold out briefly, but I've made some more copies of Extra Tenants 2020 available. I don't think I can offer too many more than this, though, as I'm pulling from a limited stock. I'm unlikely to be reprinting this module, and it's likely they will sell out before the campaign is over.

Thank you so much for backing this game! I'm very happy it's gotten such an excellent response.

You know, there was a period of time where this campaign was estimated to only hit $75k. Yet here we are at $85k, and we're not even in the final 72-hour mark yet!

It's very possible for us to hit $100k before this thing is through, and I've set up one final stretch goal to hopefully pull us over the edge.

We have unlocked the revised rulebook for all copies of the game, and all Fix Kits will come with it! We're also going to see if we can update wording on some of the Tenant Tiles. I hope this makes the game more accessible to all!

There's also another thing the Fix Kits will include, but I'll save that for later in the update. For now, let's look at the $100k stretch goal!

At $100k, we're going to give you new wooden Mogul markers! Instead of being plain wooden discs, they're going to be ostentatious representations of wealth. I've mocked up a few of them above, but if you folks have suggestions of what a mogul would travel around a city in, I'm all ears!

If we hit this stretch goal, it will be available for all backers who pledged at any level or added any add-on, as a thank-you for reaching $100k!

OK, that brings us to our next Tenant reveal:

As always, I'm sharing prototype graphics with you; these are the graphics that I'm actually playtesting with, but you're going to get something that looks far better.. Also, the exact powers may change between now and the time you receive your game.

The Vaguely-Named Charity is a Harbourside tenant that lets you effectively snag a Floor that any other player has turned in for their building. You can only use it once per round, but it might come in handy!

Finally, I wanted to show you one other thing that I've been playtesting...

I wasn't expecting to make any changes to the base game for this campaign. But if you know me as a designer, you know that I can't resist any opportunity to tweak my games and make them better.

There are two small changes to the board that I've been dying to try, and it turns out they work really well. So well, that I'm going to include them in the next printing, and in the Fix Kit.

The two changes (visible above) are:

If you have a Fix Kit coming your way, you'll be getting stickers that you can apply to your board that will update these to the new rules. They won't be a black bar with white text; that was just a way that I could easily test this and show you my proof-of-concept.

I'm also going to look into the possibility of printing extra boards and offering them as an add-on. I can't include them as part of the Fix Kit for cost reasons, but if you don't like stickers, this could be a decent workaround. What do you think?

Let's close this update with a lovely preview video that Shut Up & Sit Down did for AwSHUX last week!

Big night tonight! We are now over 1,000 backers strong, and we have smashed the $75k stretch goal!

This means that the Extra Tenants 2021 module is now going to consist of 10 Tenants! While the image above shows 10 tiles (yes, it's 2 sets of 5 in the image, but it will actually be 10 unique tenants in the final version), it's going to be 10 tiles and roughly 12-16 cards, once we settle on which of the Tenants that I'm testing will be included in the final set.
Speaking of, here's another preview! This one is a newer Tenant, so I don't have much art on it, and its final effect may change between now and the time you get the game. But I really like how it's testing so far, and I think it gives a great example of how Extra Tenants 2021 really affects the game!
The Mutual Fund Firm has a pretty big effect when you land or build on it. You gain a new Construction Yard, fully stocked with 5 Floors! The catch is... you have to take Corruption at the current round's rate (3 in 2010, 2 in 2020, 1 in 2030), and you immediately lose 3 VP (and you can go negative).
You also get a Mutual Fund Firm card, which gives you an interesting power - at the end of the game, for each Mutual Fund Firm card you have, you may discard up to 5 Floors from your Construction Yards, gaining 1 VP for each Floor you discard. You do not gain Corruption if you play multiple Mutual Fund Firm cards at the end of the game.
What does this mean?

So far, this Tenant has tested really well. It's exciting to take that risk and get a rush of floors... and Corruption, and to take that VP hit, wondering if it'll be worth it by the end of the game.

Daniel Newman has a new project on Kickstarter

Daniel Newman, who is designing the plastic buildings for this project, has a new project of his own on Kickstarter. He's working with Tony Miller, whom some of you know as one of my former co-hosts on the excellent Breaking Into Board Games podcast (and a designer with his own game, Kabuto Sumo, on Kickstarter right now).

Daniel and Tony are combining to become New Mill Industries, and they launched a campaign for The Science and Séance Society. What they're doing is really cool; they're intentionally publishing for a small print run, only for Kickstarter backers. It's a really punk/DIY aesthetic they're going for, and I really enjoy seeing that approach in board games.

Daniel in particular has been critical to my success - he's helped me in incalculable ways, and I'm really excited to see what he does here. And of course, the designs he's made for our plastic buildings have been excellent.

I'll be back in a few days with another Tenant reveal!

We're past $60k and still going strong! Even though we're technically in the "trough of sadness" (the period of time between the big funding at the start and end of the campaign), we've actually been doing very well day-by-day. $100k is not out of reach!

And now that we're approaching the $75k stretch goal, let's look at the next goal, at $85k! I've decided to insert a new goal before the 100k goal; I think this one will be valuable to hit!

I've gotten some feedback that the rulebook and card/tile text could be clearer. I wasn't originally going to revise the rulebook, and my original plan for the Fix Kit was just cards and tiles.

However, part of the goal of this campaign is to take the game to the next level, and improving the rulebook would be a big part of that. So at $85k, we will have a really good editor revise the rulebook (I have a verbal agreement with one of the best; his name rhymes with "Baul Boban"), and we'll work to untangle some of the stickier wording on the tiles and cards as well.

This increases the scope of the Fix Kit by a bit, but it means that everybody pledging for the game is going to get something significantly better!

The Private Space Program is an East Gardens tenant similar in feel to the Media Conglomerate or the Retail Space. It consists of a tile and 4 cards, and allows you to gain a Corruption to forego your random draw when someone visits one of your buildings, and gain an UltraPlastic instead. If you have a Media Conglomerate or a Retail Space, those still fire as well. This is a really good way to gain UltraPlastic early in the round... if you can spare the Corruption!

I'm showing my games at AwSHUX! You can play High Rise at 4 pm EDT on Saturday and Sunday. I'm also showing off my games The Rival Networks and Weird Stories (at 2 pm and 7 pm EDT on each day of the show, respectively). I'd love to meet you; swing by my booth!

That's all I have for now. More updates in a couple of days!